If you’ve followed my travels for a while, you’ll likely know that when it comes to cameras, I’ve always been a Canon girl. Not consciously, or for any particular reason, if I really think about it – it was just the first brand of Camera I ever owned (after saving for months, to take on my very first overseas trip to Japan!) Over the years, as I learned and evolved my photography skills, I stuck with the brand, outgrowing and upgrading a series of cameras from that first point-and-shoot, through to the EOS 5D Mark III that I’ve had for 2 years now.

I connected with Olympus through The Travel Bootcamp over 18 months ago, and after hearing a presentation about this brand, their history and their vision, I was immediately hooked. Unquestionably, Olympus are a leader in the consumer imaging market – and right from the start, I could instinctively feel how much they care. Not just about photography – and the technical, but about creativity. About customer experience. About the pursuit of everyone’s dreams. Even mine! Olympus are a brand with huge heart.

I wanted to try them out. If you’ve read my recent blog posts, you’ll see I have added not one, but two cameras to my family this year. First, I hopped around Italy and Greece with the PEN E-PL8 – and soon following that adventure, Olympus invited me to try out the OM-D E-M10 Mark III, which also involved an adventure to Queenstown, New Zealand (pinch me) and almost daily life adventures since.

While I tend to be the kind of person that finds something they love, gets too comfortable and sticks with one thing forever (I could literally eat at my favourite local cafe every day, and never tire) – it’s a different story with Olympus. It’s been a fun process to be kept on my toes, to learn two new cameras and experiment, pushing my photography skills and style, and evolving my ways a little, rather than sticking with what I know.

Let me open with this: I LOVE both cameras, and will continue to use both for different reasons, they do have some key differences. I wanted to write this post to navigate these features and compare both cameras, side by side – if you might be considering one, or both, and not sure which way to go.

Fact: Olympus only make good looking cameras, it’s in their genes. The PEN’s camera body is classic, with a little vintage feel (with a gentle tip of the hat to the first Olympus PEN from 1959) and it’s available in three colours (black, white and tan). The OM-D E-M10 Mark III is available in Black and in Silver. Its aesthetic is JUST as cute – retro but sophisticated, tiny but power packed. I’d say the PEN is definitely more orientated to the stylish, fashion-conscious customer (it has been said to be a camera made for bloggers, which I tend to agree with – it’s the sweetest addition to any travel flatlay!) 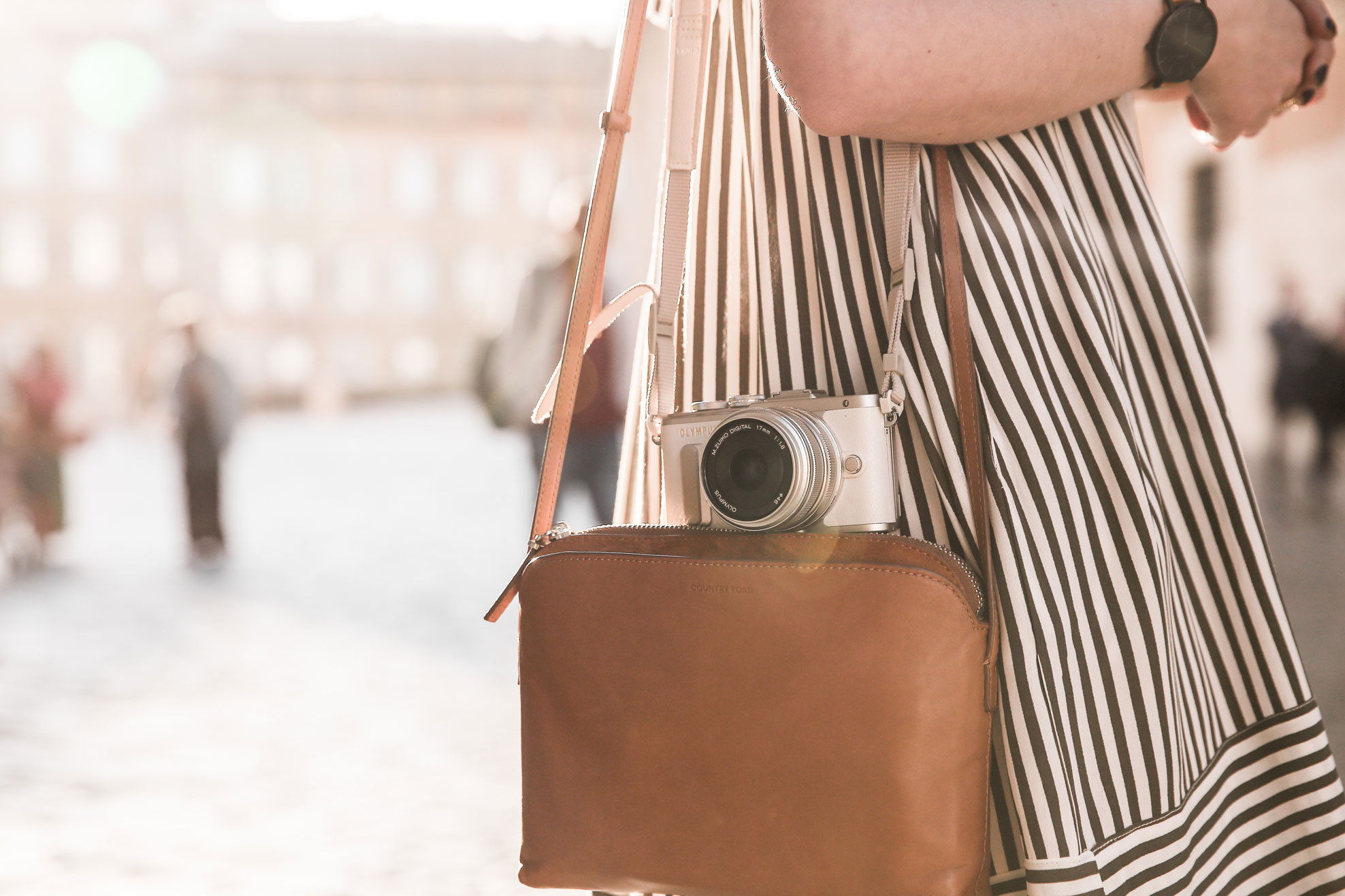 The Olympus PEN E-PL8 travelling with me through Rome 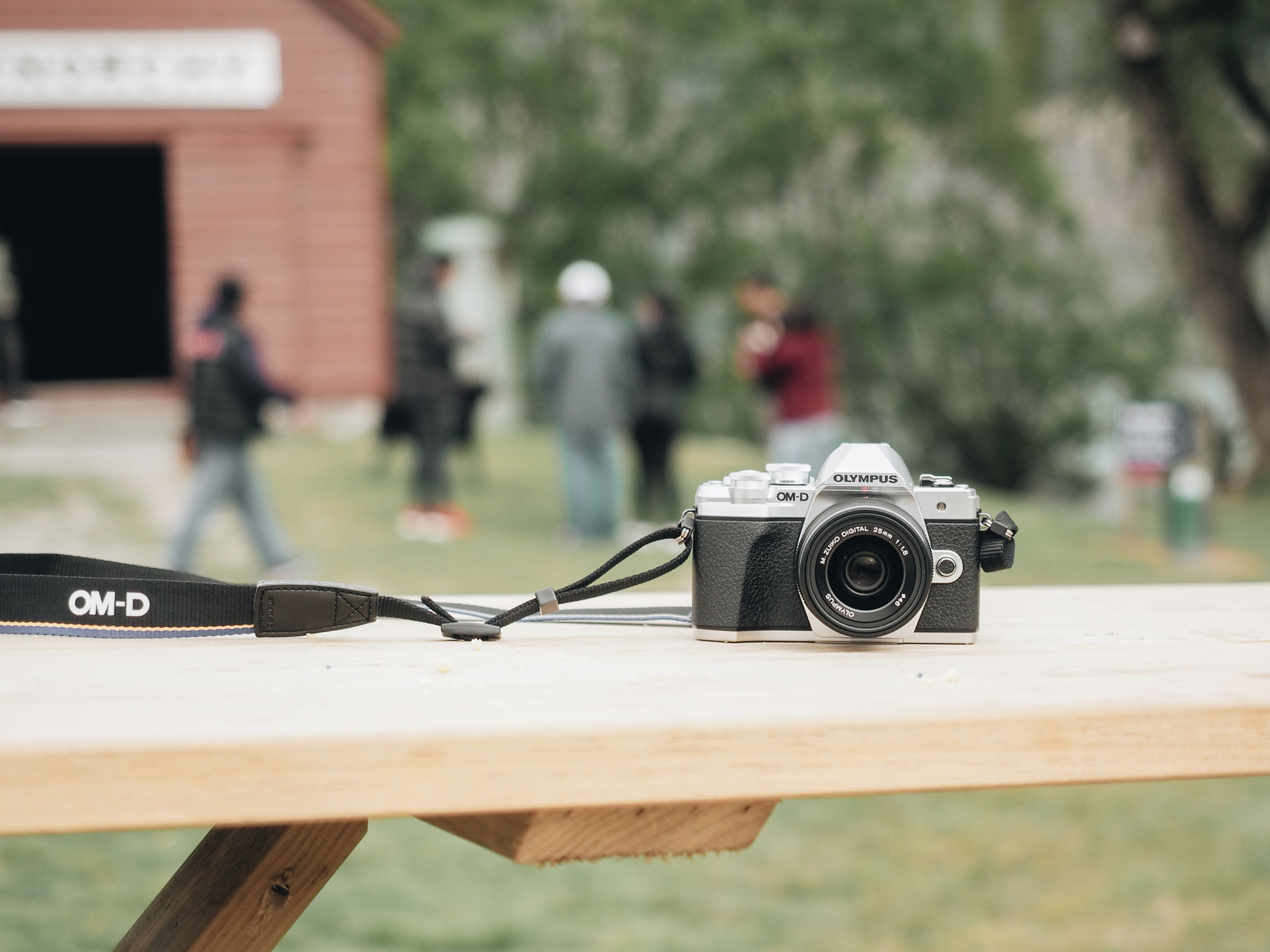 Both cameras are compact lightweight and effortless to sling around your neck and capture moments on the go – even for longest days on your feet when travelling (no more straining my neck: check!)

Getting technical, the PEN E-PL8 weights in at 374 grams, while the OM-D E-M10 Mark III is 399 grams – so just 25 grams different. The PEN is comparably more compact to the OM-D – it would slip inside your clutch bag, where as the OM-D is a little more bulky in size. 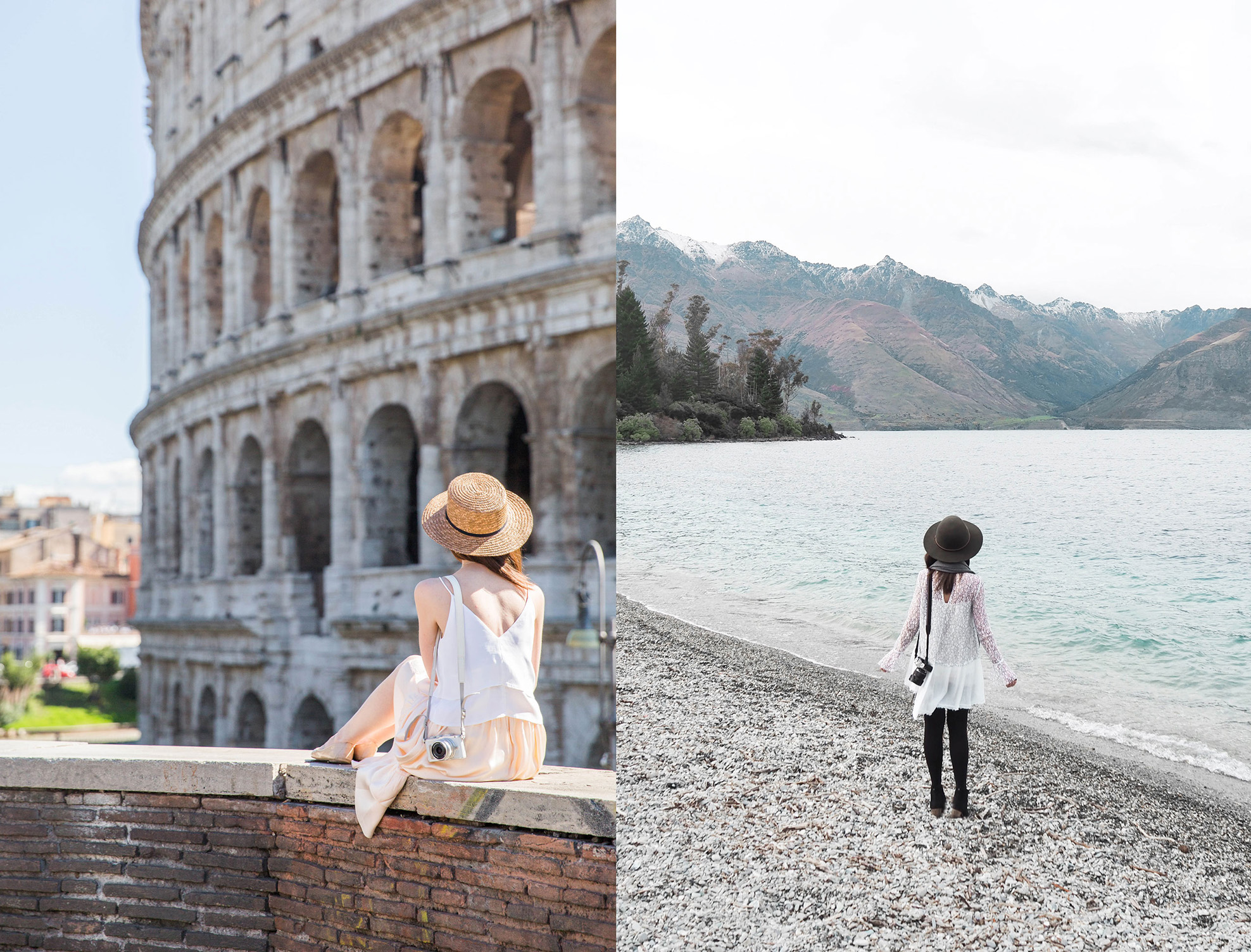 Both cameras are beautifully easy to travel with!

11/10. Olympus are so good at designing cameras that are intuitive, approachable and effortlessly easy to function. Both cameras allow interchangeable lenses and offer you plenty of room to ‘grow’ as a photographer. You can start out on fully automatic settings and immediately take beautiful images. You can also go completely manual, and control every tiny detail, flit back and forth, or sit somewhere in-between. The OM-D E-M10 Mark III has a shape that fits better in your hand, giving you better grip when you’re taking photos / videos. 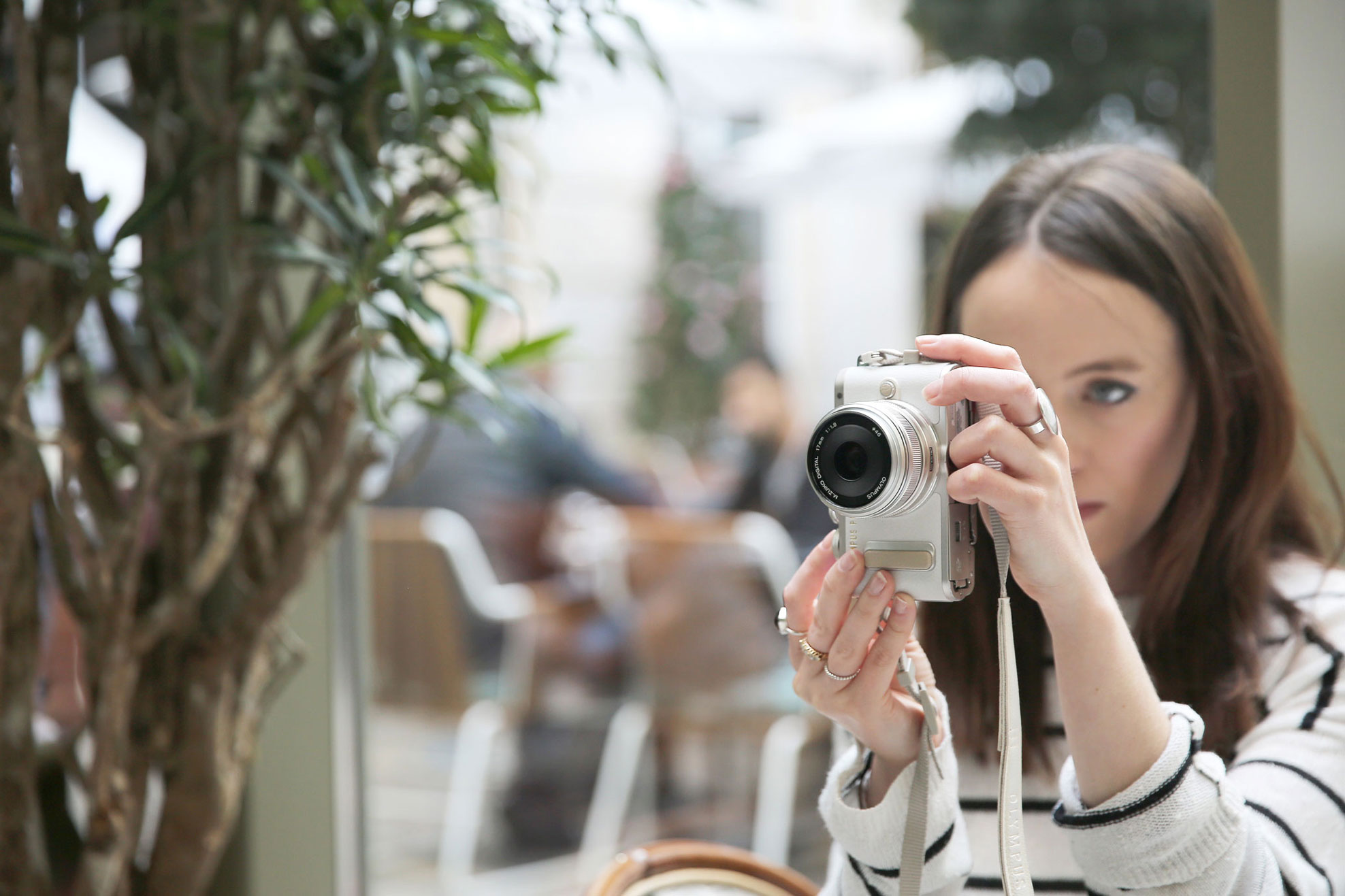 The Olympus PEN E-PL8 is a little more awkward to hold than the OM-D.

Yes, and yes! Both cameras are also Wifi enabled, which make sharing images immediately accessible. You can seamlessly download images and video via the free Olympus smartphone app, Oi Share, and at at the touch of a button you can view all the photos on your camera, then select which ones to download to your phone. The Olympus app can also be used for remote shooting, when you’re travelling solo!

All sounding pretty good so far – and also, pretty similar, right? Here are three key differences, and where the OM-D starts to come into its own as a more advanced camera. 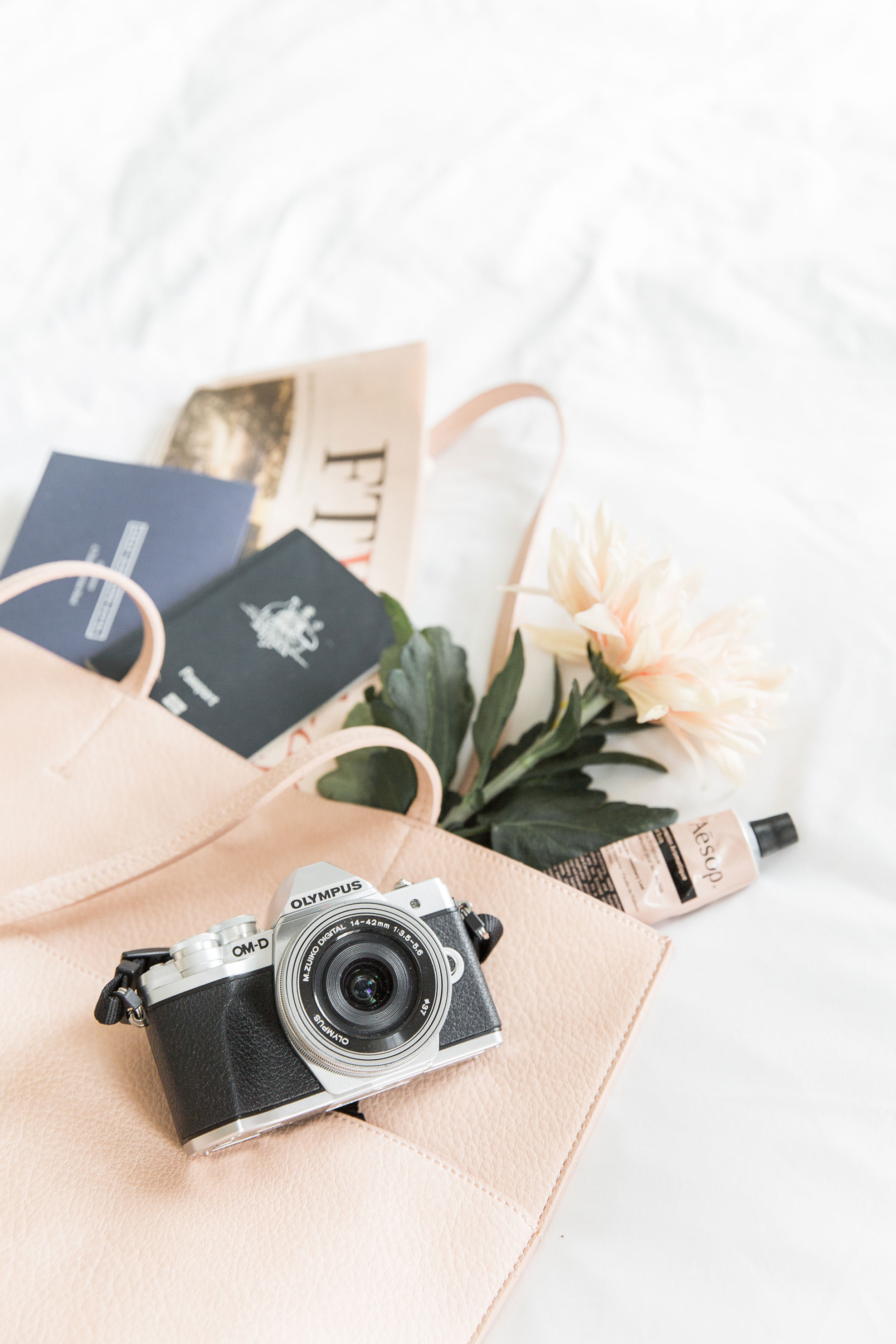 To its advantage, the Olympus Pen PEN E-PL8 has a unique feature, of an articulating screen, which flips down (180 degrees) under the camera to let you compose shots with the camera facing you. While it makes for excellent travel selfies and the perfect angle for vlogging, it only really works when handheld (it can’t be propped on a table, with the screen flipped down, nor can it be flipped on a tripod. The OM-D E-M10 Mark III screen does have tilting capability (technically, the upward tilting angle goes up to 85 degrees, while the downward tilt angles to 50 degrees). 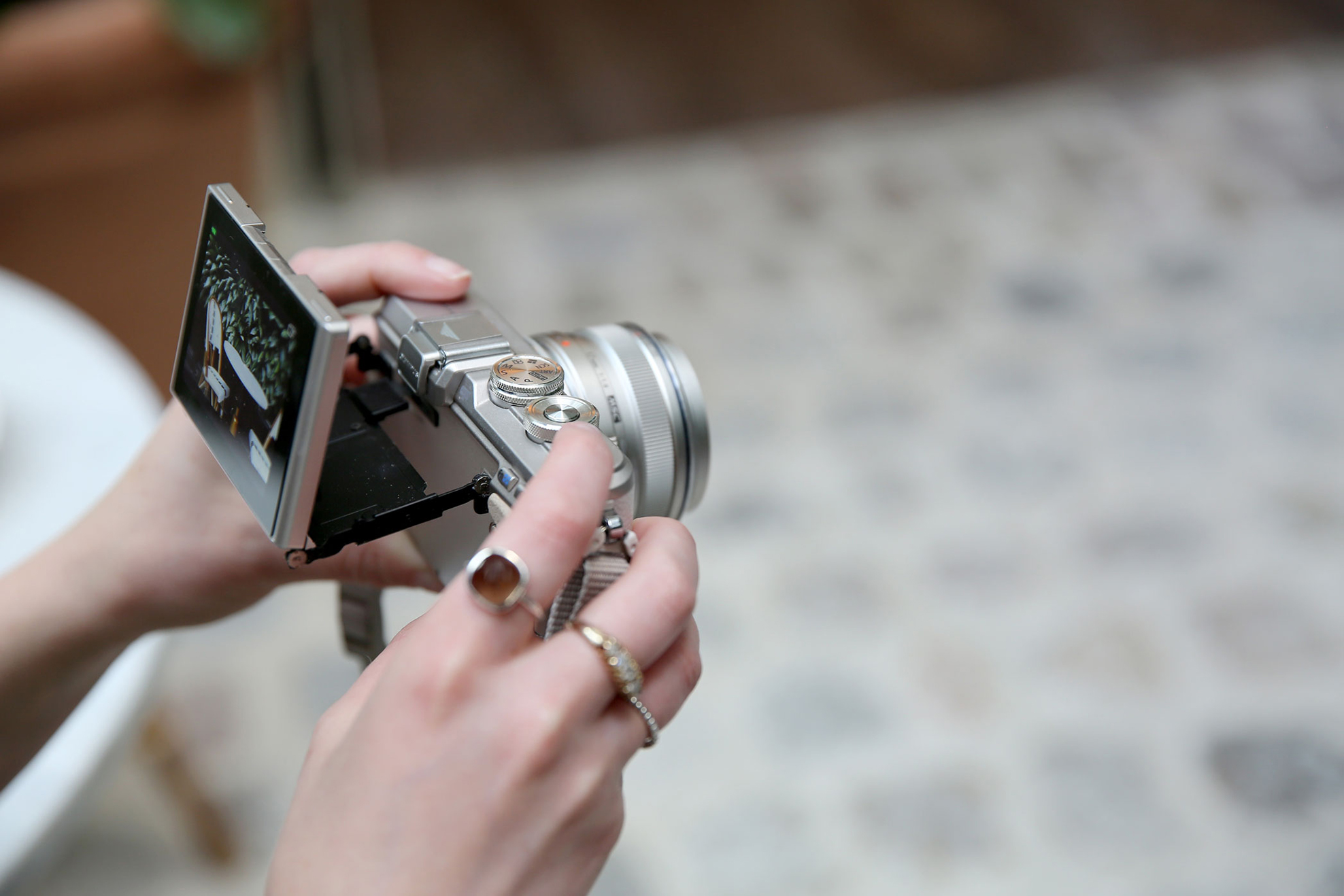 The articulating screen of the Olympus PEN E-PL8. It can extend out even further than pictured, to 180 degrees.

The Olympus OM-D E-M10 Mark III has a built in flash, while the PEN E-PL8 has no flash. It does come with a flash attachment which can be added on for use. (This feature doesn’t affect me, personally, as I only shoot without flash).

While both cameras offer HD video, the Olympus OM-D E-M10 offers 4K video, which is a noticeable step up in quality, and image resolution. On the flip side, it also means substantially higher video file sizes – so if you’re travelling light, you could also shoot in HD 1080p (for more hard drive space!)

… Et voilà! There’s a rundown of the key features of both cameras, and their differences. 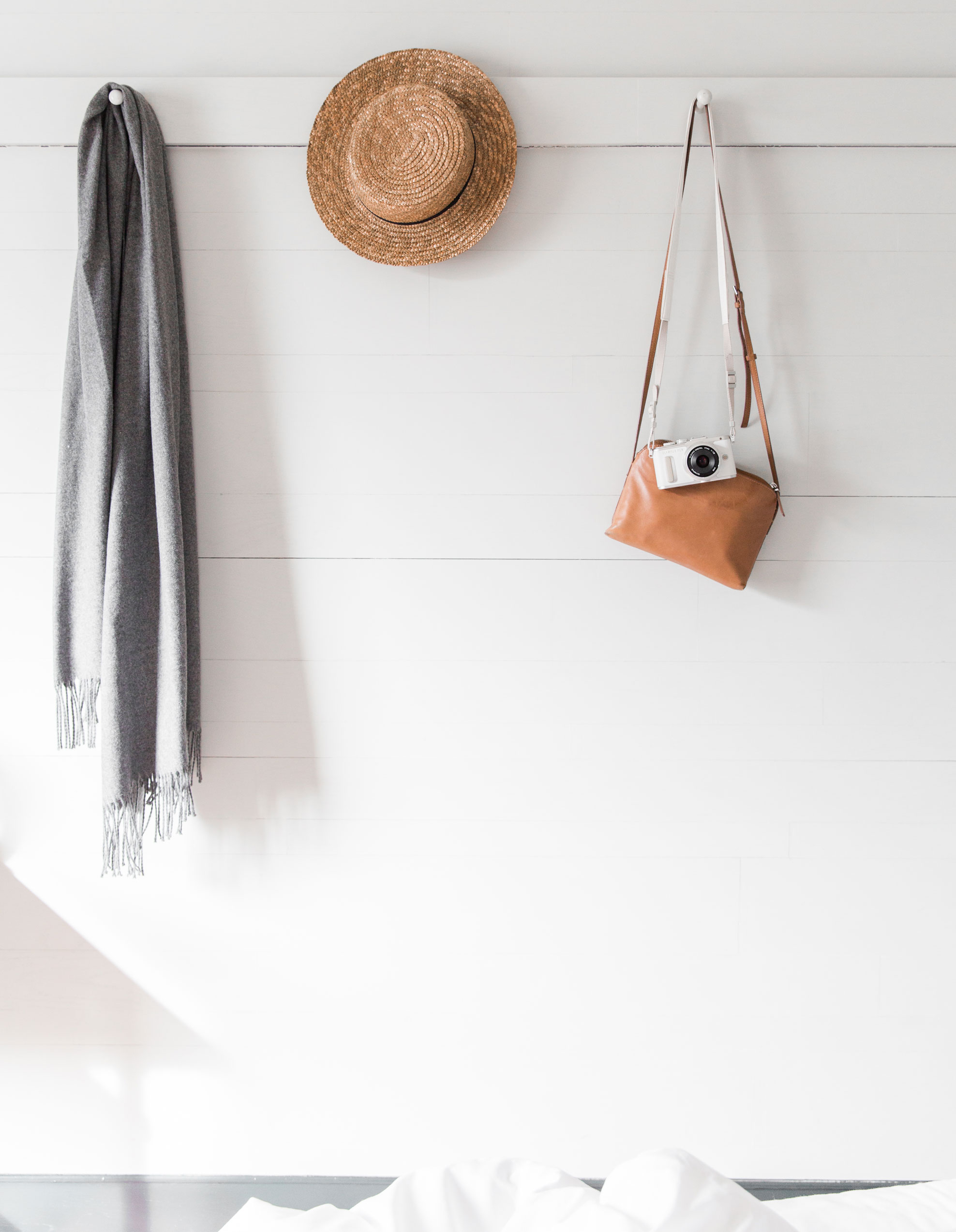 I will not (cannot!) decide on a favourite – because I honestly love both for different reasons, and will continue to use each cameras in different situations.

The PEN E-PL8 has the advantage of being more compact and fashionable. Aesthetically, it’s the prettier of the two, but I’d also say that comparably, it’s more entry level. It’s like the more flirtatious, cheeky cousin of the OM-D.

The OM-D E-M10 Mark III offers the 4K video, and viewfinder advantages, which for me, are significant, and continue to be a determining factor when choosing which camera I take out with me to shoot. While both cameras offer you plenty of room to grow as a photographer, the OM-D will take you just that bit further. 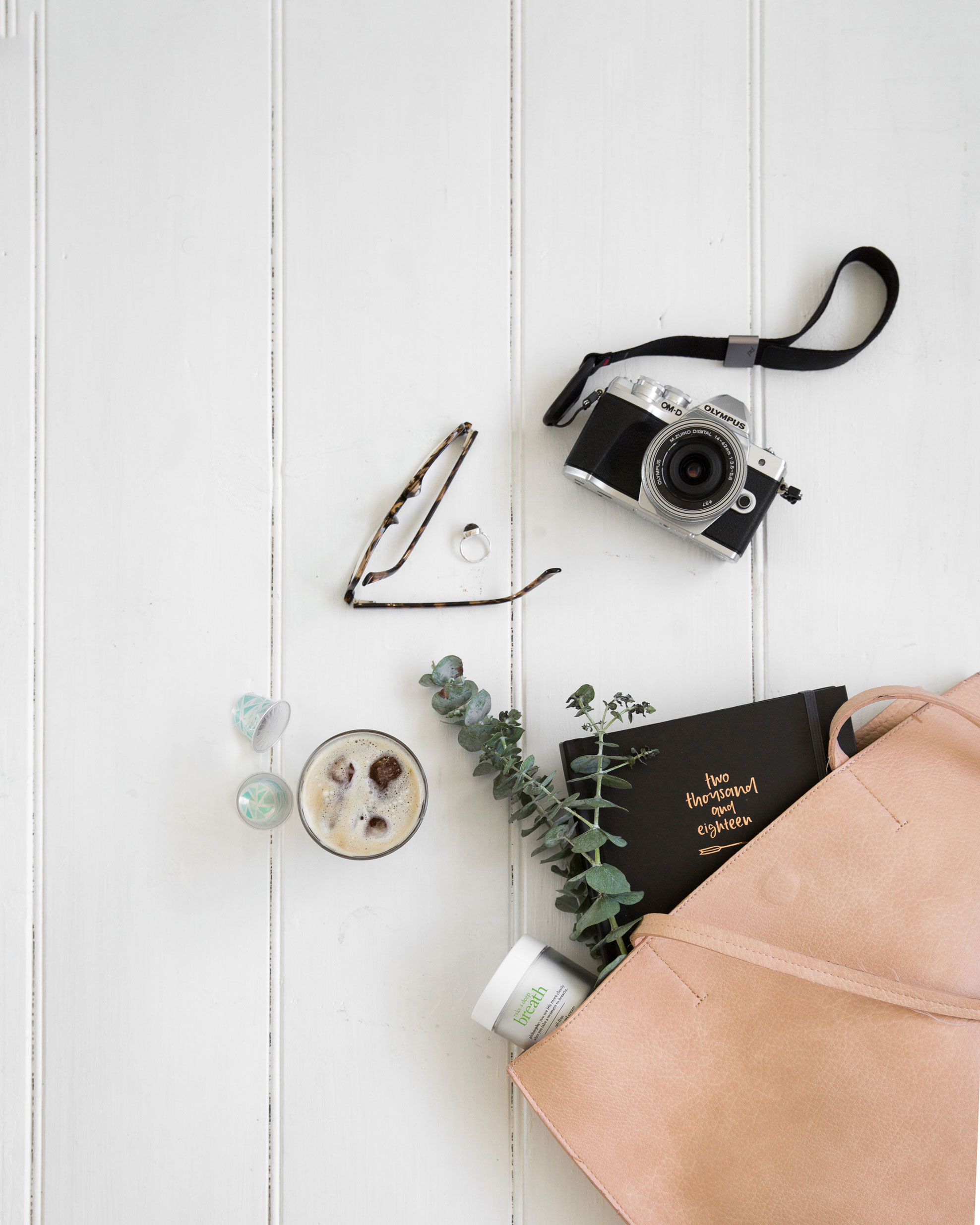 What camera/s do you use? Do you stick to just the one camera always, or do you switch it up? Share with me via the latest post on Instagram.